Date: 20 August, 2013
Hello Florence,.I again wanted to let you know how much we love our dog. She is so amazing. Cam and Kona graduated from puppy class (6 weeks of training) this past week. I have attached a few pictures. We did miss 2 weeks of class, as gone to Calgary for a week for kids soccer, but she didn’t really need the extra-she is so smart, and to Clear Lake for a week. She loved being on the boat with us and hanging at the lake. She potty trained so easy (thank you), she sits on command, walks nice on a leash, shakes a paw, leaves it and takes it. We are working on stay and coming when called. I think she doesn’t like to come when called because when we discipline her we always say- Kona no or Kona down-she hears her name when in trouble. We are trying to not do that!!! She loves the water including a couple showers and plays at the lake.  She goes to bed with Cam about 1000 p.m. and sleeps until we get up at 0700. All 3 boys have enjoyed her and her fun disposition. She loves to growl with her toy in her mouth-she wants to play. You just cant say no-no matter what you are doing when she comes to you and asks so nice. She does have some behaviour we are trying to correct-she loves to put her front paws up on the kitchen countertop and see what we are doing-she especially loves to snag a bun or some moose jerky or the dishcloth if she gets a chance.
I have attached some pics.
Saw your new puppy facebook-so cute!
Many people have asked we got Kona and have showed some interest in your program-hope it may bring you some business Take care.
Jodi and Erin, Cam, Brock, Matt and Kona

10 months old, Kona
On Fri, Feb 21, 2014 at 10:45 AM,
Greetings Florence and Bob,
Congratulations on your new litter of pups, so cute.
Just sending you an update on Kona - her and Cam are best buds! We are so enjoying her-she has such a wonderful nature. She loves to play and still has her little growl when she brings a toy to let you know it is playtime! We had her for her first trim and she looks like a young pup again. I have included a pic!
Cam is feeling great. Kona sleeps either with him or on the floor beside him (when she gets too hot). All 3 boys and Erin and I have fallen in love with her-she gets lots of attention here! Lots of friends coming and going from the house-so she gets lots of stimulation. We are looking forward to some warmer spring weather!
Kona spent 3 weeks at my parents farm in Yorkton while we went to Hawaii over Christmas-the city dog-LOVED the country. I was worried she would not want to come back home.
Take care, Jodi, Cam, and Kona 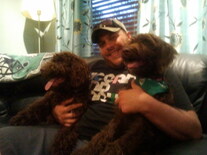 Hi Florence and Bob,
Just wanted to send you a quick email and picture of Kona and Layla. We finally had our first playdate together. Jasmine and Greg came over to the house and stayed for about 2 hours! Kona was so excited. She has lots of kids here and we have been to puppy class, but she really enjoyed it. The picture is Greg with the girls!

Funny things we found out….both girls like to sit on the stairs on their bum with 3 paws out, only Kona has the growl when she has a toy in her mouth (I want to play), they both have the white blaze on their chest, they look very similar just one more curly than the other, potty trained so easy (I think I said it before…but thank you!), they both like to lie on the hardwood floor to sleep vs in the bed or any pillow or cushion we buy for them.
3 of 4 of us are teachers so all (like you, Florence)just heading back to work.  Saw your little puppy on Facebook….so cute.   Jodi and Erin 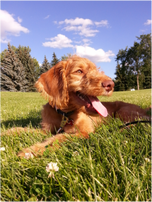 Aang has been great! We've been so impressed with how smart he already is. Already sleeping through the night as well. Has messed in the house only twice the first day, then a couple times yesterday (we missed his cues) - he does go to the door for outside which is great. A few days in between he had no messes. He's even going most of the time in a specific area outside.
Did you two work with some simple commands with the pups? He seems to understand and respond to sit, no (which is great), he likes to fetch and will sometimes even bring it back to us haha. Also he was awesome when I bathed him!  The first night he cried a bit, but by the third night he was nice and quiet.  We are happy and he seems to be adapting really well. We just have to learn the leash together haha. He is not a fan of it right now lol.
​Stephanie and Sauvelm 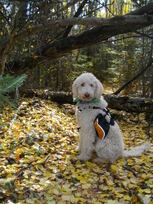 Dudely with his cool weather coat!
Hi Florence and Bob Just had to send you a picture of my Birthday Boy  He is 1 year old today and he such a good boy, he seems to get better every day.  We do spend lots of time together and when I go into PA I take him to daycare at the SPCA. He get to socialize with his friends, he is so friendly and  gets along with all the dogs, the girls there are also very good caring dog lovers.This is today's picture and my neighbor gave him a ball for his birthday.  I think everyone in my subdivision likes Dudely .This picture was also taken before I got him clipped, two times a year seems to be just about right.   I'm putting in a plug for the groomer "Hugs & Kisses. Lorraine  cell: 314-5658   She is terrific and so caring.After his cut and he is so happy, we do a bush trail every morning and a afternoon walk of some sort.  He is a happy
dog, still chewing on most toys and loves antlers that my neighbor was happy to give me, he's also enjoying a deer leg. I love this little-big mutt and I thank you so much.
Have a great day......Wendy 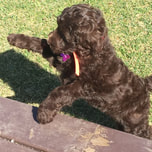 Hi Florence,
I just want to say we cannot thank you guys enough for our precious Sprinkles, she has been such a great puppy and pal for the kids. We all love her dearly and she is doing so good.
Thanks
Chantille, Ryan, Cheyenne, and Chayla

Hi Flo! All is well here. Juno is so precious. We adore her! Such an easy pup. My mom and dad are enjoying her while we are at work. It's hard to leave her in the morning though. ☺️☺️☺️ 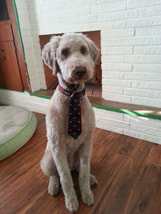 Hi Florence,
Dexter is doing very well, he's a very happy and hyper dog. He absolutely loves scratches and belly rubs as well as long walks and playing fetch at the park. He also loves chasing his doggy-cousins, Mya, Oliver and Erin. He's grown a lot since we took him home last July, he is now weighing in at 62lbs. He is truly the dog we asked for when we initially filled out the online inquiry on your website for a dog - we couldn't be happier. He's such a kind and smart dog. He's very curious, and lately a little more adventurous than we'd like, but we're still working on off-leash training. He's much more curious about food now than he use to be - he has always liked apples though. His other favorite to try to get from us is cheese.
House training when we first brought him home went well, so did kennel training. We have stopped using the kennel in the past month, but have put his bedding from the kennel in the exact spot his kennel was and he knows what it means when he is told to go there and he stays there all night. He learnt many other things very early - sit, lay down, and shake paw. He has also learned to leave it, go to your bed/mat, and my favorite - pound it - which is when he touches his nose to your fist when you ask him to. I thought I would teach him something unusual for fun.
We've also already gotten him neutered, and that went very well also - he didn't even need the cone on his head to prevent him from licking the incision. I'll have to send you that information in the near future.
I've attached one picture for now, as I haven't downloaded all of them off of my phone yet. He's much lighter in color than the chocolate-brown he was when we got him. This picture was taken right after he went for a bath at the groomers.
Hope all is well!
Talk to you again,
Amy and Cameron Wood

Thought I would like to let you know that our second puppy, Red Ribbon, is now named Yogi. Dexter and Yogi are getting a long great so far. Yogi likes to run everywhere he goes, we constantly hear his little feet running up and down the hallway. First thing he does in the morning is look for Dexter.
Here's some pictures.
Talk to you soon, 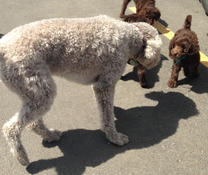 Dexter meeting his new little brother Yogi for the very first time. These boys have the same mommy.
​ Hi Florence,
Happy New Year! 2017
Just wanted to send along a few pictures of Oscar and to let you know how much we love him and how he has become an important member of our family! He makes us laugh everyday…..
He is very easy going and can be noisy!  He doesn’t bark much (except at his brush!! ??  haha) but he grunts and “talks” it is absolutely hilarious!  When he and i have cuddle time; which is every morning when I have my morning coffee, he falls asleep in my arms and groans.
We always know how he is feeling and we seem to have learned his “language” haha!
His favourite sleeping position is on his back- spread eagle ….  As much as he likes to cuddle he also like to stretch out…… he has a bed but prefers the floor or the green chair …which has now become HIS chair. He is “potty trained’ now and “tells us” when he needs to go outside. He’s very smart and can sit, stay and shake a paw.  We are still going to take him to puppy school as he still needs to learn to “come” on command.
He is crate trained and in his crate when we’re out of the house and in the car.  He was sleeping in his crate at night but now sleeps under our bed.  It’s very cute as he has dragged a pillow under there along with his blanket and has made himself a little fort.  He stays there all night!  He has a “ girlfriend" named Heidi and they play in the backyard. We are looking forward to the warmer weather so we can get him outside more and he can meet other dogs in the neighborhood. There are several dog parks close by but I want to wait until he can come on command before I take him.
He now has all his shots and de-worming medications, we plan on getting him neutered in the spring. He was spoiled at Christmas and came skiing with us to Panorama for New Years. He was a good boy in his crate.
I trust all is well with you.  We are looking forward to getting through this freezing month of January.
Take care,
Nancy 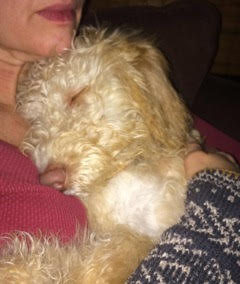 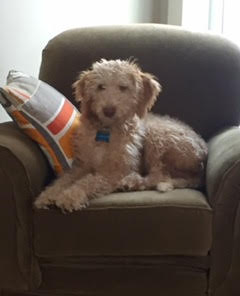